This morning I posted a few living room pictures to instagram and realized I had never shared the before pictures with you of our living room!  The house had been freshly painted but was definitely not our style.  And as you can see, there used to be a window right over the fireplace.

We found that to be so strange and my poor decorating heart was just broken because the mantel is prime space!  In our previous home I had a huge mirror and rotated out a chalkboard and artwork that leaned up there.  Where would I put the big mirror?  A giant chalkboard?  Why on earth do we need another window in this room?  This is that moment when I wonder if builders ever consult designers before they build homes.

Then, the more we thought about the floorplan of the living room and the old sectional that we already had, the more we realized it would just work best if we could put our TV over the fireplace.  So one of the first updates we made after moving in was to call a contractor and have the window taken out.  It had to be bricked in from the outside and sheet rocked in from the inside.  Fortunately they were able to put in conduits to hold all the electrical wires for our TV at the same time.  Score! 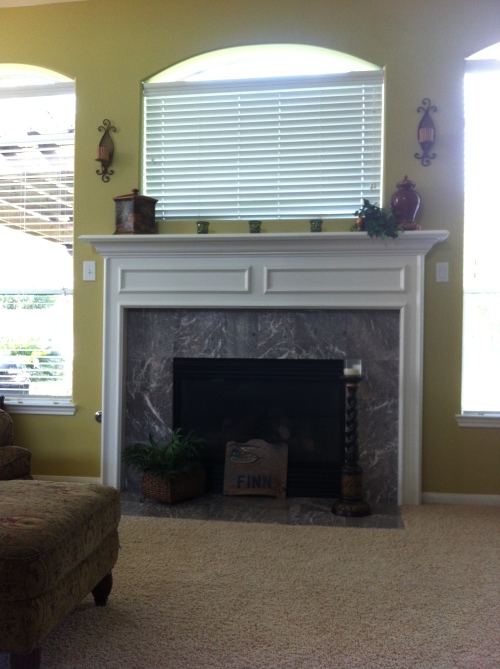 Here’s the living room today!  Before the window was filled in, we painted everything white and had the floors replaced.  Just recently though, we added the bamboo shades.  Those white blinds were original to the home, so they were about 15 years old and half of them are broken.  We are slowly replacing them throughout the house.   I love that the new shades add so much color and texture and we are able to hang them high enough to cover the arches in the windows!  I know that in some circles, it has been a decorating faux-pas to have the TV over the fireplace, but I really think that is changing, especially in casual living/family rooms like this one.  Its nice to really only have one focal point in a room and when you have a media wall separate from a fireplace wall, your fireplace/mantel ends up playing second fiddle.  I love that here we get to focus around both spots.

Having another chair or two that’s not directly facing the TV, like our gray one from Ikea, also helps it feel conversational and not like everything here is about watching the screen.  I love that little spot and having the empty table next to it is just an invitation to sit and sip some coffee, read a book, or have a conversation.

Here’s the room from another angle.  The coffee table is new as well.  In my previous post about our living room, you can see we had a round ottoman.  I loved that ottoman so much but we were able to sell it and I was so ready to have a real coffee  table.  My kids have grown past the point of needing soft rounded edges and now we are playing games on this one, doing puzzles, etc, and its been so much fun!  Also, since I really don’t have the space for end tables for the couch, we needed it to hold drinks, especially when we entertain.

This old couch has seen some better days but its still so comfy and works well for our family.  We got it after we had been married for one year from Foley’s furniture, which doesn’t even exist anymore, ha!!  We’ve now been married for 11 years, so yep, its pretty old!  I’m so thankful that even in my youth and inexperience I chose something that was a neutral color and of pretty good quality.  It has served us well.  I may try to wait a few more years until my kids are a bit older to see about replacing it, though I dream about it every once in a while. 😉  Thanks so much for reading, hope you’re having a great week!